Scroll Down and click on Open-Continue for destination link

Why Telegram is Mass banning Movies channel ! What's the reason behind it?

Hello Folks , You may all are using Telegram , Most of you have telegram because of to download movies or web series , Right? 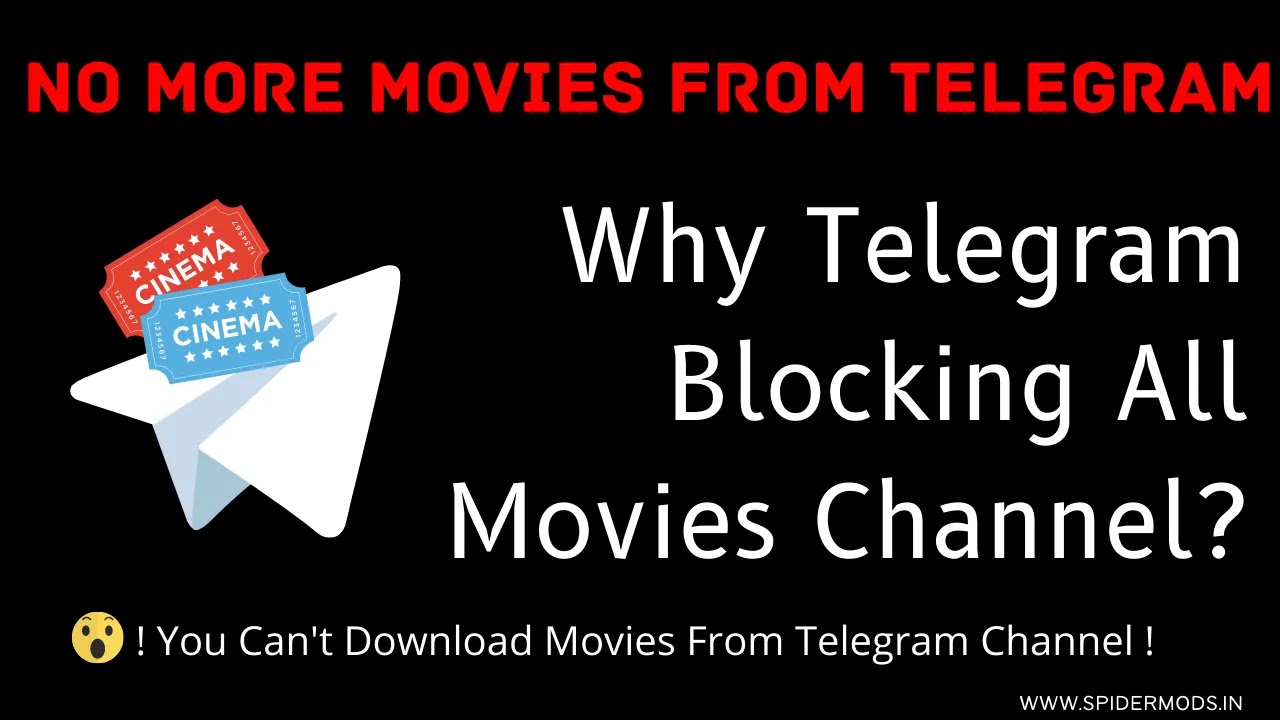 But From Yesterday, You may seen all movies channel deleted all the post from their channel and some of them has changed name also Do You know the reason behind it?

Most of the Telegram Movies Channels are Banned :

Yes , You may seen some channels won't get opens and shows one error like "This channel unavailable due to Copyright infringement", Telegram doing this from past 2 days i.e from 10-02-2021. and some got info about this and deleted their posts from channel to save  from copyrights.
Some Screenshots of The Channel which Got Blocked: 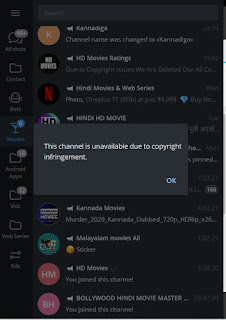 What's the Reason For Banning?

I know you are very curious to know this information, So I have provided all the information from different sources: Note that the first 2 reason is taken from external source.

Telegram confirmed to TechCrunch that it has removed dozens of channels over the course of the last day, citing concerns that the accounts were inciting violence.

“Our Terms of Service expressly forbid public calls to violence,” Telegram spokesperson Mike Ravdonikas told TechCrunch. “…In the past 24 hours we have blocked dozens of public channels that published calls to violence for thousands of subscribers.”

The company confirmed that a number of accounts TechCrunch had previously observed promoting white supremacy, Nazi iconography and other forms of far-right extremism were part of the new enforcement action, which is still expanding. Some of the blocked channels were still viewable on Telegram’s web client Wednesday.
One of those now-removed groups bemoaned Telegram’s bans Tuesday in a post displaying a Nazi flag and the warning “you can’t kill an idea.” Prior to being taken down, that channel boasted more than 10,000 followers.
Many extremist channels began publicizing backup accounts Tuesday, pointing subscribers to dozens of other groups where they could continue to gather. Other sympathetic channels chronicled the bans in real-time, posting screenshots documenting violations of Telegram’s terms of service.

A court has ordered Telegram to block access to pirated movies, TV shows and music following a lawsuit filed in Israel. Local anti-piracy group ZIRA complained that the messaging platform does not properly respond to takedown notices, contrary to Telegram's claims that it does. Telegram is now working with rightsholders to implement the injunction.
Telegram Last November, the RIAA and MPAA nominated popular messenger app Telegram for inclusion on the USTR’s ‘notorious markets’ list, claiming that the platform doesn’t do enough to combat piracy.
A month later, the EU added the service to its own ‘Counterfeit and Piracy Watch List’, noting that along with other social media platforms, Telegram “lags behind” in respect of efforts to combat piracy.
This opinion is shared by Israel-based anti-piracy group ZIRA. Last year, ZIRA – which represents local media companies – took its complaints to court, hoping to force Telegram to take a more serious approach to infringement mitigation

You all know telegram is giving service to its users from past 7 years and recently they crossed 500M+ Users, They Clearly stated that we need more funds to handle server costs and now we are finding difficulty to arrange those fund so we decided to start monetization in coming days.
As I stated above Telegram is 7 years old , Anyone can upload any files (Max 2GB per File) to telegram for free, All the movies channel sharing movies from 2014-2015 i.e from 5 years approx. There are 10000 movies channels in telegram , Just think each channel shares 100+ movies in different quality and in 1000+ channels then what will be the size ? , So get rid from this telegram is doing these things , If channel get blocked its hard to restore so all the files in it will be deleted and there storage will also get reduces ...... What a Plan right?... But I cannot say this is the actual reason because its my opinion it may be right or wrong that I don't know ....

As per the Telegram's terms and condition sharing illegal files/ Pirated Files to public is strictly Prohibited , but none of them is following this rule.. may be telegram is now strict so they are banning all those who violated their terms.

How to save our channels?

Telegram Day by Day Banning channels so If your channel still alive , accessible and you want keep it safe then you should follow below guide.
If You want to safeguard your channel you must do this, Because I know its very difficult to gain subscribers

Most of the Users Downloaded Telegram Only Because of to download movies , But at this situation it is impossible so may most of the users would leave telegram.     If it happens it will be the huge loss to telegram.  Thank You
Share With Friends