Home
Android
How to

How To Develop Android Application In Mobile 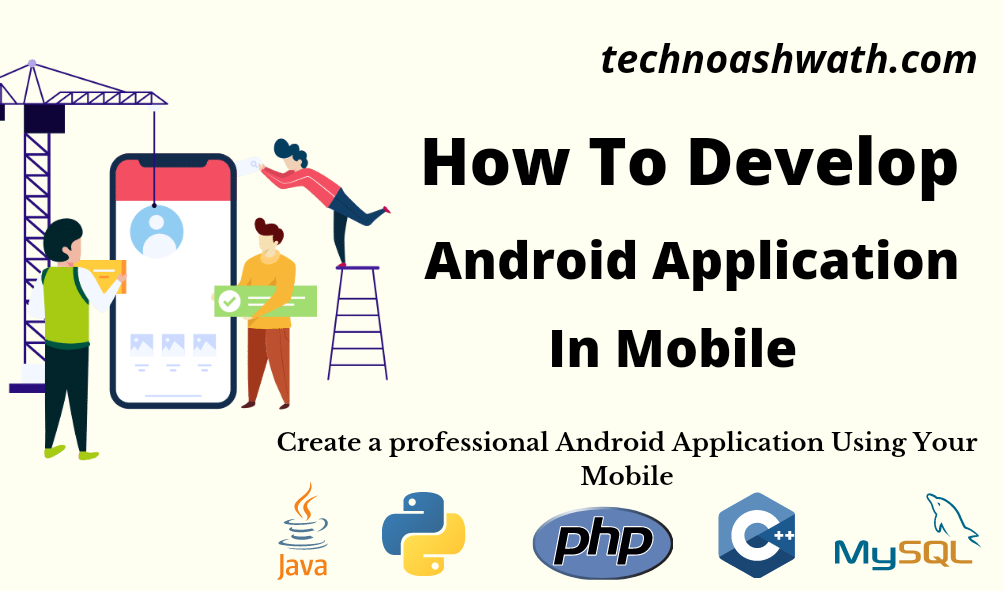 Today now the generation everyone gives interest about Programming language and choose Developing and programming as a career. And in this field there are too competition and competitors.
In case of Application developing there also too many competition in market. That why because Everyday there are too many application launch in Play store and App store. So in this topic we are talking about this topic.

Before we start discuss about Android app and how to develop first we have know that what is Android ? So Android is the type of operating system which runs only mobile version. And it specially design for only Touch screen device such as smart phone and tablets.
And Google is the one of the top company which develops Android operating system which runs in Android devices such as mobile and tablets.

What is Android Application ?

What is Programming Language ?

Can we Develop An App in Mobile ?

If the question about can we develop an Android app in mobile then our answer is Yes, we can develop a professional Android App in mobile like Android Studio.
If you don't know what is Android Studio, the it is the software which is develop by Google Developer Community. And by the help of this we can develop an Any type of Android Application but its only run in Computer or other Desktops.
But in Mobile phone it is possible to develop Android application. That's why because there are too many platforms comes in Android phone that really helps us to create Application. The use of Some platform we can create Android apps very easily but they doesn't look like a professional look but other some platform we use to create very attractive apps in mobile.

What is the Platform to create App in Mobile

AIDE means Android  Integrated Development Environment which help us to create Android Application in mobile and the whole process of develop same as Android Studio. So In AIDE there are some SDK file, XML files contains Layout and App theme, Android Manifest which is XML format, Java Files and other Build Gradle files.
XML helps us to create Android UI design, structure design, Layout build and Application Styles build. And Java files helps us to workable our Android app by giving some logics. And finally Gradle file is the main things of any Android Application that helps us to change the package name and increase Android API level.

How to be a Android Developer ?

In year 2021 there are most of people gives there interest about Android Developing. But this is not easy to be a Android Developer specially in year 2021. To be a Android Developer, you must study in Computer Science in your Graduation time.
After graduate you must learn these programming Languages such as C, C++, Java, python and Kotlin. Specially you have to focus on Java and python. Because these programming languages are very powerful languages and very important also.
Where java is used to create Website as a Script and Android Apps and Android Operating System, python used to create Website, Application, Software and different types of Game.

How to Create Android App without Coding ?

There are too many Application which is already available in play store that helps to create Android application in mobile and without coding. We cannot give example of this type of platform because we doesn't suggest to use this. But most of the people think that can we develop Android app with out coding so the answer is Yes, we can create Application easily but those application are not look like professional app and we cannot customize the whole design for the app.